Although Patch 8.1, Tides of Vengeance, is going to be hitting the live servers this December, Patch 8.2, Rise of Azshara, is already shaping up to be a content-filled experience and a much-needed jolt of energy when it comes to the long-term plan for WoW’s success down the road. One of the most major features shown off in the reveal of some of Patch 8.2’s content at BlizzCon 2018 was the addition of Heroic Warfronts. And while they may seem like a mere footnote at first, they could have more overarching competitive effects than we might be realizing.

Over the course of the past few months, Battle for Azeroth has been through its fair share of highlights and pitfalls, as inconsistencies in quality, structure, and overall direction have plagued the expansion throughout its infancy. However, despite everything, if there’s one piece of content introduced alongside BfA that has most definitely shown plenty of room for capitalization and expansion, while also serving as a major bright spot, it’s Warfronts. Their very nature promotes a fiercely competitive landscape in a PvE setting, while still harkening back to the focal themes of war and conflict – themes that World of Warcraft has always prided itself upon throughout its history.

From top-level raiding to Mythic+ dungeons, and all the way back to Mists of Pandaria’s Scenarios and their heavy influence on BfA’s Island Expeditions, it’s obvious to see that WoW has never had a shortage of content on the PvE side of things. And now, with the Warfront system already establishing itself as a highlight of Battle for Azeroth’s content rollout, the addition of a heroic difficulty will surely expand upon the solid foundation that Blizzard has already built.

According to the official World of Warcraft: What’s Next Panel Recap, Heroic Warfronts will be a brand new PvE experience “where you and nine of your friends can enter into a Warfront as a team, play at a higher difficulty, and collect epic new rewards”. And while the initial description seems a little unclear and vague at first, the fact that Heroic Warfronts are even coming to the game in the first place is healthy for World of Warcraft’s competitive scene. These Warfronts open up plenty of doors and could expand upon content that’s already proven to be really solid and actually fun. With a competitive edge added onto a solid form of PvE content, the sky is the absolute limit. 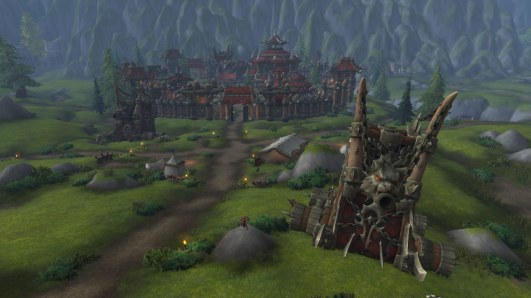 Of course, while the “loot” portion of the aforementioned description is a major draw, as any sensible route to an increase in item level will be worth every competitor’s time, the fact that we’re even seeing Warfronts evolve into something greater is definitely a step in the right direction for what could be the strongest experience Battle for Azeroth has to offer.

This time next year, Heroic Warfronts could become part of the next generation of World of Warcraft’s core PvE content; rivaling raids, dungeons, and world quests. When it comes to opportunities for loot, progression, and a well-oiled competitive experience, Heroic Warfronts might just be the jolt of energy that pushes BfA over the brink. With a surplus of old-world zones to work with, and plenty of opportunities to expand upon mechanics like resource collecting and construction, Warfronts are shaping up to be a flexible, intricate, and intriguing piece of content that could appeal to every member of the WoW audience, both casual and competitive alike – with time.

And while there’s still much to do before Rise of Azshara hits the live servers sometime next year, Heroic Warfronts are already looking like they’ll serve as a major piece of Patch 8.2’s content. There is a serious amount of flexibility that Warfronts offer, as there are plenty of chances to involve all of Azeroth in the war campaign, especially during the course of the game’s most war-focused expansion. Keep in mind that as we move forward towards the bulk of the content rollout in Battle for Azeroth, there will be plenty of chances for the upper echelon of WoW’s playerbase to get another leg up, while new challengers could appear, strengthening the overall competitive integrity of the game in the process.

There’s genuinely no negative outcomes to the addition of Heroic Warfronts, as they could definitely provide a much-needed boost to the expansion. Additionally, the game’s top percentage of players will definitely see some serious benefits, while the majority of WoW’s playerbase will reap the benefits of a more competitive game, as well. It’s only a matter of time until we expand our horizons from just the Arathi Highlands. War will surround all of us, soon enough, and Azeroth’s top defenders will surely be there to answer the call.